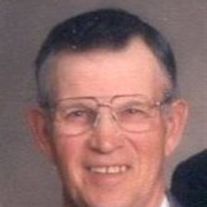 Harvey F. West Jr., age 80, of Wautoma, died on Sunday, September 7, 2014 at Berlin Hospital. He was born on July 1, 1934 in Milston, WI to Harvey F. Sr. and Amanda (Rhoades) West. Harvey was raised in Black Rivers Falls and graduated from high school in 1952. On April 27, 1957 Harvey married Bernadyne Olson at Hope Lutheran Church, Wautoma. The couple continued to live and farm in the Black Rivers Falls area until moving to Wautoma in 1963. Harvey continued to farm and also worked at the Walker Company until he became employed by the Waushara County Highway Department, retiring in 1990. He enjoyed hunting, farming, and spending time with his family, especially his grandchildren.

Funeral services will be held at 11AM on Thursday, September 11, 2014 at West Holden Lutheran Church. Officiating at the service will be Pastor Barb Girod with burial to follow in the church cemetery. The family will greet relatives and friends at church on Thursday from 10AM until the time of service at 11AM.

In lieu of flowers, a memorial has been established in Harvey's name.


To order memorial trees or send flowers to the family in memory of Harvey West, please visit our flower store.