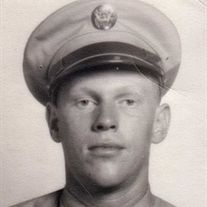 He was born June 19, 1930 in the Town of Springwater, the son of Norman and Blanche (Arveson) Olson. He married Mary Ann Hahn on January 31, 1959 at St. Joseph Catholic Church in Wautoma.

Harold served his country in the Army from 1951 until 1953 during the Korean War. He was employed as a lineman for Waushara Electric Cooperative for many years until his retirement. Harold also farmed and raised cattle in the Town of Mount Morris. He loved the outdoors and enjoyed hunting, fishing and being with his family. He was a lifetime member of the VFW.


To order memorial trees or send flowers to the family in memory of Harold Olson, please visit our flower store.