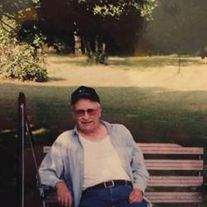 Harold Raymond Gibbs, age 95, formerly of Hancock, passed away Saturday morning, March 29, 2014 at Juliette Manor in Berlin.
He was born March 10, 1919 in the town of Deerfield, the son of Wylys and Carrie (Bacon) Gibbs. He married Beatrice Holat. She preceded him in death in 1967.
Mr. Gibbs served his country in the United States Army Air Force during World War II and was stationed in Hickam Air Force Base in Honolulu, Hawaii at the time of the Japanese attack on Pearl Harbor. After Harold returned home, he was employed as a postal clerk in Hancock, Wisconsin. He enjoyed many types of sports including baseball, basketball, and football. He especially liked to attend the local High School women's basketball games with his lifelong friend, John.
He is survived by his two sons and their spouses, Ronnie Lee & Terry Gibbs, Oshkosh, Ricky Jay & Barbara Gibbs, Pell Lake; a grandson, Richard Harold Gibbs, Oshkosh, and further survived by other relatives and friends.


To order memorial trees or send flowers to the family in memory of Harold Gibbs, please visit our flower store.