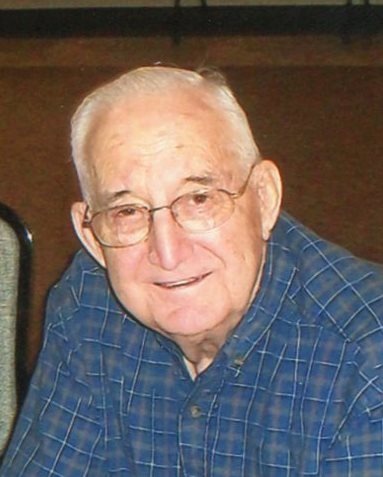 Harold Edwin Fritz, age 87, formerly of Wautoma, passed away peacefully Tuesday, May 26, 2020 at his daughter’s home in Green Bay.

Harold served his country for six years in the National Guard. He worked at Fritz Sand & Gravel and later 4X Corp. in Wautoma for many years until his retirement. After retiring, he was a maintenance worker at the Wild Rose Manor.

Harold also operated an 80 acre farm north of Wautoma on County Road MM for many years prior to having health problems. He enjoyed woodworking, building furniture, picture frames, bird houses / feeders, or anything someone requested. He will be remembered for building the cross that stands inside Trinity Lutheran Church.

Harold was a lifetime member of Trinity Lutheran Church in Wautoma where he served as Elder and Trustee for many years.

In addition to his wife of 54 years, he was preceded in death by his parents; four brothers, Arnold, Norman, Walter and Lyle; one sister, Irma Runnels.

Harold was a gentle soul with a heart of gold who was willing to give himself and his time for anyone who needed him.

Funeral services will be held on Saturday, June 6, 2020 at 11:00 a.m. at Trinity Lutheran Church in Wautoma with the Rev. Brian D. Rohde officiating. Following military honors, Harold will be laid to rest next to his beloved wife at Wautoma Union Cemetery.

Visitation will be held at the Church on Saturday from 9:00 a.m. until the time of services. A memorial will be established in Harold’s memory.

If these walls could talk.…

They would speak of a man who has worked with great heart to accomplish his plan.

They would speak of the times that he’d prayed in the night for strength to go on and do what was right.

They would speak of sweet moments of laughter and fun, the times with his children, his love for each one.

Oh, if they could talk, it would just be the start of a story of love of a great man and his loving heart.

The family would like to thank the staff of Aurora Hospice for their wonderful and loving care they provided for Harold and his family.

To order memorial trees or send flowers to the family in memory of Harold Fritz, please visit our flower store.