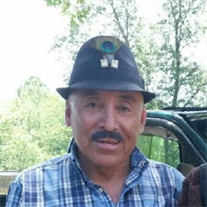 He was born Sept. 26, 1946 in Kenton, Ohio the son of Isabel and Josefina (Perez) Melendrez.
Guadalupe served his country in the Army during the Vietnam War. He and his family were migrant workers in the area for many years. Lupe loved his family and was very proud of his children and grandchildren. He was always there for his kids and he will be deeply missed.

He was preceded in death by his daughter, Laura Melendrez on Aug. 24, 1993; his parents; and by three brothers, Isabel Melendrez Jr., Valentin Melendrez, and Alberto Melendrez.

To order memorial trees or send flowers to the family in memory of Guadalupe Melendrez, please visit our flower store.