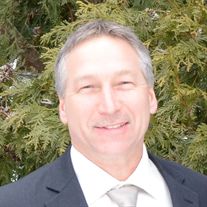 Gregory William Welk age 56, of Wild Rose, died suddenly at Theda Clark Hospital in Neenah, Wisconsin, on November 23, 2015 with his family by his side. He was a wonderful husband, father and friend with a huge heart that touched everyone he knew.

Greg was born on March, 5th, 1959 in Merrill Wisconsin to William L. and Lois M. (Ament) Welk. He along with his family moved to Kenosha, Wisconsin in 1965 where he attended all grades of school & graduated from Bradford High School He was active in sports such as football & wrestling and Boy Scouts-attaining the honorable rank of Eagle Scout. After graduating high school, Greg attended UW Parkside University.

Greg moved to the Wautoma area in the early 1980's where he began a career in carpentry and home construction. He eventually founded and grew his own successful business, Landmark Construction Central, LLC-specializing in residential and commercial construction.
Greg enjoyed hunting with his son Jordan and four-wheeling with his son Ethan. He loved working with his hands including woodworking, metal working and mechanics. He helped his father rebuild and customize an old Ford pickup. Along with his love for the outdoors and travel, Greg enjoyed sharing his faith as one of Jehovah's Witnesses and helping others find happiness in serving Jehovah God.

He was the oldest son of six children who included three girls and three boys. He was preceded in death by one sister, Linda Jackson and Nephew, Russell Jackson, of Kenosha in 2008. Also preceded in death are his paternal grandparents, William E. and Gladys (Batchelder) Welk and his maternal grandparents, Roman J. and Esther (Borchart) Ament, All of Merrill, Wisconsin.
Along with his loving wife Jill and her two children Ethan and Savanah, Greg is survived by his children Jordan and Ethan Welk, his parents, William (Bill) and Lois (Ament) Welk of Oshkosh. Two sisters, Karen (Dennis) Puckett of Wautoma, Marjorie (Lennie) Lambert of Racine and two Brothers, Gerald (Jerry) and (Ellen) Welk of Oshkosh and Brian ( Debra) Welk of Hortonville. Also Niece's Carly Jackson of Kenosha, Hannah Welk of Hortonville and Nephews Keith Puckett of Oshkosh, Andrew Puckett of Deforest and Casey Welk of Hortonville.

Greg was a very caring, generous, happy and loving person who was always smiling. He is sadly missed by all!

To order memorial trees or send flowers to the family in memory of Gregory Welk, please visit our flower store.