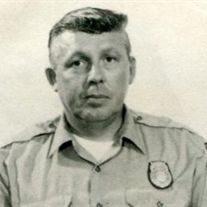 Gilbert A. Voss of Wautoma WI went to be with his Lord on December 10, 2014, with his children at his bedside. He had recently been residing at Rosemore Village in Wild Rose. Gil was born to Arthur and Ann Voss on August 11, 1929 in West Allis WI. After graduating from high school, he enrolled in the Army and served in the Korean War. When he left the military, he applied for a position as a Conservation Warden for the Wisconsin Conservation Department (known today as the DNR). He was stationed in Ozaukee, Waushara and Green Lake Counties. He married Denise (nee Shew) Voss in 1961. After leaving the DNR for health reasons, he worked briefly for the Green Lake County Zoning Office as the Zoning Administrator until his retirement. Gil's love of wildlife and nature guided his entire life and made a lasting affect on his children and grandchildren. To all his friends and family, he was known as a "true gentleman".

Gil is survived by two daughters: Laurie (Janek) Cieszynski, Omro; Vicki (Brad) DePasse, Appleton; a son David Voss, Wautoma; and his precious grandchildren, Clayton and Christopher Cieszynski, Omro; Lindsey DePasse, Appleton; and his former wife, Denise. He is further survived by his relatives in Watertown WI that meant so much to him. He also leaves behind his beloved cat, "White Cat". Preceding him in death were his parents, and a granddaughter, Claudia Cieszynski and his faithful pets throughout his life; Buck, Mac, Dutch, Penny, Ginger and Wobbles.

Gil's family wishes to thank the caregivers at Rosemore Village for their loving care; Pastor Rohde for making Gil's journey to Heaven easy; Agnesian Hospice, and the Wild Rose Hospital.


To order memorial trees or send flowers to the family in memory of Gilbert Voss, please visit our flower store.