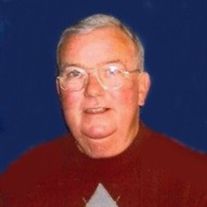 Gerald Carlyle Thorstad, age 71, of Troy, Ohio passed away on February 11, 2015 after a battle with cancer. Jerry was born in Mt. Morris, Wisconsin on June 3, 1943 to the late Jack and Jeanette Thorstad on the family farm. He is survived by his wife of 50 years, Diane Sonnenberg Thorstad. He is also survived by his daughter Sheri M. Kearns as well as 3 grandchildren, Austin, Marissa and Alicya Kearns all of Troy. In addition to his parents, he was preceded in death by his son, Daniel C. Thorstad and his brother, Douglas Thorstad, and his father-in-law and mother-in-law, Walter and Glenis Sonnenberg. He is also survived by his brother and sister-in-law, Dale and Susan Sonnenberg and Owen and Francine Sonnenberg. In addition, he is survived by nieces and nephew, Dawn (Marty), Renae (David), Jennifer, Tyler, Stephanie and Rexanna as well as numerous
extended families and close friends.

After graduating from Wautoma High School, he graduated with his degree in accounting from Whitewater in Wisconsin. He began his career with Oscar Meyer Corporation, then on to Kimberly Clark Corporation eventually becoming mill manager at Brown Bridge in Troy. After this he purchased his own commercial printing business with his wife called Peters Printing in Troy. After selling, he was zoning inspector for Elizabeth Township, consultant at Batelle and Batelle and assisting in office at RD Holder. He was an active member of the Troy Chamber of Commerce serving as Chairman and also graduated from Leadership Troy. He was a member of the US Army Reserves as a tank driver. He is also a member of the First United Methodist Church.

He enjoyed his many trips back to Wisconsin to hunt and fish on Little Lake by the family farm. He and Diane also enjoyed their many trips with their RV out West to Arizona each winter as well as numerous camping trips around the area. He also loved spending time with his grandchildren and attending their numerous activities.

We would like to thank Dr. Kathula and his staff for their care this past year, as well as the excellent care he received at Miami Valley Hospital, Troy Rehab, and Fidelity Home Health. We would also like to thank all the family and friends that have sent cards, made meals, given rides and sent prayers our way this year.

Services will be held 11:00AM Saturday, February 14, 2015 at the First United Methodist Church, Troy, OH with the Rev. Dave Leckrone officiating. The family will receive friends at the church on Saturday from 10-11 AM and following the service at First Place Christian Center.


To order memorial trees or send flowers to the family in memory of Gerald Thorstad, please visit our flower store.