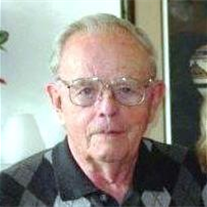 George served his country in the Army from 1941 until 1942. He and his late wife resided in Milwaukee for many years where he was employed at International Harvestor and Wisconsin Gas Company. George retired from Milwaukee County Recreation Division. After moving to Wautoma, George was the manager of Waushara Country Club from 1980 until 1996. He enjoyed golfing and trout fishing on the Kickapoo River. He was a member of St. Mary's Episcopal Church, Masonic Lodge and Order of the Eastern Star.

Survivors include 20 nieces and nephews.

In addition to his wife, he was preceded in death by his parents; two sisters, Eunice and Margaret; and by five brothers, Louis, Vernon, Lyle, Wayne, and Dale.

A memorial service will be held on Thursday, March 17, 2016 at 11:00 a.m. at Leikness Funeral Home in Wautoma with Rev. Domnik Israel officiating. Interment will be at Woodville Cemetery, Town of Deerfield.

Visitation will be held on Thursday from 10:00 a.m. until the time of services.

To order memorial trees or send flowers to the family in memory of George Ray, please visit our flower store.