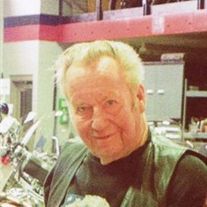 George D. Petersen, age 87, a resident at Wisconsin Veteran's Home, King, formerly of Manawa, died Monday, January 19, 2015. He was born on February 17, 1927 in Waupaca to Christopher and Thyra (Hanson) Petersen. George worked at home on the farm until enlisting in the U.S. Army on February 6, 1946 in Milwaukee and was honorably discharged on June 1, 1951 from Camp Kilmer, NJ. He then worked as a mechanic for a number of years and then retired from the Waupaca County Highway Dept. after 18 years. On April 2, 1994 he married Nancy Rodgers in Waupaca. George enjoyed riding his Harley's, hunting, fishing Polka music and dancing.

Funeral services will be held at 11AM on Friday, January 23, 2015 at the Main Chapel, Wisconsin Veteran's Home, King. Officiating at the service will be Chaplin Wayne Schwanke followed by Military Honors with burial in Lakeside Cemetery at a later date. The family will greet relatives and friends at the Main Chapel on Friday from 9AM until the time of services at 11AM.

In lieu of flowers, memorials would be appreciated.


To order memorial trees or send flowers to the family in memory of George Petersen, please visit our flower store.