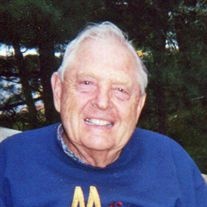 He graduated from St. Catherine's High School in Racine, WI. He then served his country in the U.S. Army during the Korean War. He was a combat wounded veteran for which he received a purple heart. After returning from the war, he went back to work at Western Publishing Co. in Racine, WI. where he worked for 42 years and retired in 1986 as Vice President of manufacturing. While working, he attended night school at Marquette University where he earned an MBA and a degree in Industrial Engineering. After retiring, he spent his summers in Wautoma, WI and winters in Gulfport, FL.

A Memorial Service will be held on Friday, Sept. 4, 2015 at 11:30 a.m. at Leikness Funeral Home in Wautoma with Rev. David Greskowiak officiating. Full military honors will follow. Burial will be at Holy Cross Cemetery in Racine at a later date.

Relatives and friends may greet the family on Friday at the funeral home from 10:30 a.m. until the time of services. If desired, memorials may be given to woundedwarriorproject.org

George's family extends their deepest gratitude to the staff of Heartland House that gave such gentle and loving care to George during his stay there.

To order memorial trees or send flowers to the family in memory of George Kaplan, please visit our flower store.