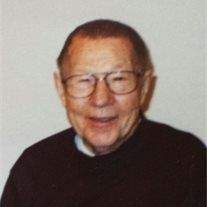 Frederick John Harasha, 87 died peacefully at Heartland Home on June 9, 2015. He spent his last days surrounded by his family along with the support and care from hospice and Heartland Home caretakers.

Fred was one of seven children born on April 19, 1928 to George and Clara Harasha in Lancaster, WI. He graduated from Lancaster High School in 1946 and then attended the University of Wisconsin-LaCrosse earning an Accounting Degree. His career with Rural Electric Cooperative began in 1949 at Grant County Electric Cooperative as a Cost Accountant, continuing his career with REC moving to Carthiage, IL and then to Wautoma, WI to Waushara Electric Cooperative in 1955. He went on to become the General Manager there until retiring in 1992. Fred served on many state and national committees in the power industry and was instrumental in coordinating purchases of wholesale power from investor-owned electric utilities.

After moving to Wautoma, Fred, was introduced to Cheryl (May) in 1957. He married his best friend and the love of his life on May 31, 1958 and the couple resided in Wautoma for 57 years. They went on to have and raise four children.

Fred was very involved in his community, a long time member of the Jaycees, Rotary Club, and Knights of Columbus. He volunteered and served on many boards and committees, including Habitat for Humanity, County Cupboard and the local American Red Cross Chapter, After retirement, he also volunteered as a guardian for adults with developmental disabilities, helping with their financial affairs.
In later years, Fred enjoyed staying active in community affairs and St. Joseph's Parish, traveling with his wife, Cheryl and spending time with friends, siblings, children and grandchildren.

Fred was preceded in death by his beloved wife Cheryl, their son Craig, parents, George and Clara Harasha, brother Ralph Harasha and his sister Mary Knapp.

Visitation for Fred will be at St. Joseph's Catholic Church, Wautoma on Friday, June 12, 2015 with visitation at 1:00 p.m. followed by a 2:00 p.m. funeral mass. Inurnment will take place at a later date at Calvary Cemetery.

A special thank you to Agnesian Hospice of Green Lake and the caregivers at Heartland Home.
In lieu of flowers, donations may be made to Rotary International, www.rotary.org.


To order memorial trees or send flowers to the family in memory of Frederick Harasha, please visit our flower store.