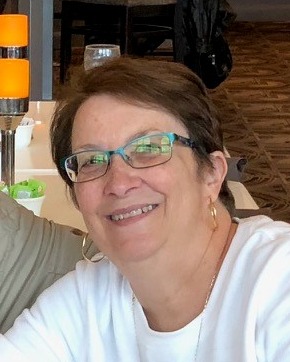 Fran (Francene) Church passed away peacefully at her home on December 30, 2022.  She was surrounded by family and friends throughout her last weeks and enjoyed the company of those she loved so much.

Fran was born in Rockford, Illinois on June 18, 1948 to Jim and Alice Arnone.  She grew up in Rockford with her parents and younger sister, Jamie Arnone, and several aunts, uncles and cousins.  She met her eventual husband, John Church, while working at his father’s dental office in Rockford.

Fran Arnone married John Church on August 22, 1970 in Rockford.  They started their family in the Chicago suburbs where they met many longtime friends who stayed close throughout the years.  They moved back to Rockford with their children, Laura and John. The children finished school in Rockford before heading to college.  Fran continued her work in the insurance industry and eventually retired as a human resources executive with Aetna in 2013.

Throughout this time, Fran and her family spent much of the summer and many weekends at their northern retreat at Crystal Lake near Wautoma, WI.  The tiny cottage (and later home) on Northwoods Trail was visited by many friends and family (and dogs) over the years and Fran was a most welcoming host.  Fran also formed many lasting friendships with those who lived on the lake and was actively involved in fundraising and contributing to a thriving community on Crystal Lake.

Fran enjoyed watching her children grow up and eventually took on her “role of a lifetime” -– Nana to three grandchildren, Alice and Lillian (Church Johns) and Jenna (Church).  These girls were dear to her heart and will go into their adult lives cherishing the memories of time spent with Nana.

In the years that she lived permanently at Crystal Lake, she became active in the St. James Catholic Church community of Neshkoro and served as a eucharist server and supporter of various Catholic charities.

Fran is survived by her husband John and sister Jamie; daughter Laura and her husband David and their daughters Alice and Lilly; son John and his wife Megan and their children Jenna, Michael, and Sawyer.

In lieu of flowers, please consider a donation in Fran’s name to the Waushara County Animal Shelter; PO Box 68, Wautoma, WI 54982 or wausharacoanimalshelter.com

The family would like to extend thanks to all who supported and provided care to Fran throughout her stay at Meriter-Unity Point Hospital in Madison (6th floor nursing crew) and while in hospice care (ProMedica nurses). They would also like to thank and recognize all those who came to visit or spoke on the phone with her to keep her spirits up during her illness.

To order memorial trees or send flowers to the family in memory of Francene "Fran" Church, please visit our flower store.