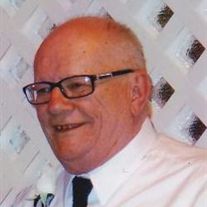 Eugene "Gene" R. Hempler, age 75, of Neshkoro passed away Oct. 16th, 2014. Gene was born April 28th, 1939 in Crandon, WI. He served in the military from January 1957 to January 1960. He was an over the road truck driver for most of his life. He enjoyed playing cards on Tuesday nights with his friends and playing games with the family, Farkle was his favorite.

A private service will be held for the family at a later date. Leikness Funeral Home, Wautoma is assisting the family with arrangements. www.wautomafuneralhome.com


To order memorial trees or send flowers to the family in memory of Eugene Hempler, please visit our flower store.