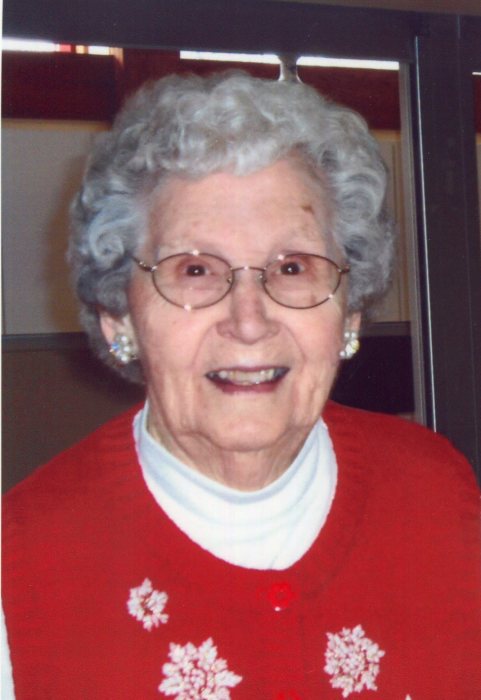 Esther L. King, age 100 of Coloma, passed away Friday, March 10th, 2017 at Prairie Place assisted living in Ripon, WI. She was blessed with long life and peacefully passed into the loving arms of her Lord and Savior.

She was born February 25th, 1917 in Chili, WI the daughter of Adolph and Bertha (Schilling) Foemmel. Esther attended 8 years of school at the Cozy Corner School in rural Clark County and 1 year at Granton High School. On April 8th, 1936 she married Darwin W. King at the Methodist Parsonage in Westfield. Most of their 69 years of marriage were spent farming in the Coloma area. They retired in 1973 and purchased a home in Coloma where she continued to do domestic work. She was a member of Calvary United Methodist Church of Coloma. She moved to Ripon in 2014 to be closer to her family and resided at Prairie Place. She was preceded in death by her husband Darwin on May 27th, 2005, her parents, and all of her siblings, Samuel Foemmel, Naomi Roehl, Silas Foemmel, Paul Foemmel and Lydia Zimmerman.

Funeral services will be held on Saturday, March 18th, 2017 at 11:00 a.m. at Prince of Peace Lutheran Church in Coloma with Rev. Joan Frost of Calvary United Methodist Church officiating. Burial will be at Hillside Cemetery in Coloma.

Visitation will be at the Church on Saturday from 10:00 a.m. until the time of services. If desired, memorials may be given to Calvary United Methodist Church in Coloma.

To order memorial trees or send flowers to the family in memory of Esther King, please visit our flower store.