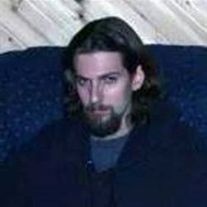 Eric Michael Burklow, a 38 year young man with a kind heart, and gentle soul of Wisconsin Rapids. He lived for life, but he left this world after a long ordeal with lung disease, though this did not disway him from being an organ donor. He has returned to his Heavenly Father on Tuesday, April 22, 2014 at Meriter Hospital, Madison. He was born in Cook Co, IL on April 5, 1976 to Wayne and Barbara (Boehner) Burklow. Eric gave what he could in life, even after he moved on from this world, he gave the gift of life to others. He had this uncanny and unwavering ability to care for, not only his clients at Harmony House, but also for anyone, and everyone that he met through life's great adventures. Eric wore so many hats that it is difficult to begin listing them; he was a son, a brother, a Godfather, an uncle, a teacher, a caregiver, an adventurer, a musician, a dancer, and a friend to name just a few. In short, if you knew Eric, you knew a beautiful man, and you know just how much he will be missed!

Funeral services will be held at 2PM on Saturday, May 3, 2014 at Leikness & Stahl Funeral Home, Plainfield. Officiating at the service will be Pastor Brian Roehrborn, with burial to follow in Plainfield Cemetery. The family will greet relatives and friends on Saturday at the funeral home from 11AM until the time of service at 2PM.

In lieu of flowers, a memorial is being established and may be directed to the funeral home (P.O. Box 296, Plainfield, WI 54966) www.plainfieldfuneral home.com


To order memorial trees or send flowers to the family in memory of Eric Boehner, please visit our flower store.