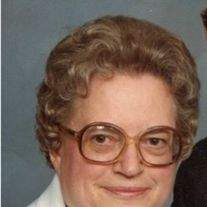 Edna was born June 9, 1919, in the Township of Newton, (Marquette County), the daughter of Henry A. and Helen E. (Knapp) Marotz. She died peacefully at her home in Heartland House on Friday, April 4, 2014.

She graduated from Westfield High School in 1936 and from Stevens Point State University in 1940. She then taught high school home economics in Escanaba, Michigan, Mellen, Wisconsin and Fond du Lac, Wisconsin. She married Herbert Henne on October 18, 1947 in Immanuel Lutheran Church, Westfield.

Edna's joy, focus, and priority were her extraordinarily strong marriage and the raising of her four daughters. She was a meticulous homemaker and a strong role model for her family. She was a member of the Richford Homemakers Club and also enjoyed square dancing. Edna was a talented teacher and was a 4-H leader in Richford for many years. She enjoyed sewing, cooking, gardening and food preservation, and helped many 4-H members learn to enjoy them, too.

In 1949, Edna and Herbert were blessed with a baby daughter, Sandra, who was developmentally challenged. Edna and Herbert devoted the next several decades working tirelessly to obtain educational and occupational opportunities for children in the community with special needs. They, along with other parents and concerned citizens in the community, formed the Waushara County Association for Retarded Children and the Waushara County Chapter of the Special Olympics. Because of their work in the late 1950's, the special-needs children of Waushara County were able to receive the educational opportunities that were lawfully theirs.

As the years passed, Edna and Herbert were involved in the founding of the Waushara Industries, which continues to remain a strong presence in the community. Edna always felt that at any age, all special education students and clients needed extra love, protection, and care throughout their lives. Edna enjoyed travelling. In 1946, she and a girlfriend travelled by car to Yellowstone National Park to work as cooks for the summer. Edna and Herbert enjoyed travelling and included Sandra when possible. They went to Europe, Mexico, Canada, the Caribbean, and much of the US including Alaska and Hawaii.
Recently, Edna was a member of Hope Lutheran Church in Wautoma. Previously, she taught Sunday School for many years at St. Peter's Lutheran Church in Richford, taking pleasure in teaching the pre-school children in the church kitchen around their special short-legged table and little chairs.

She was preceded in death by her husband, Herbert, on May 14, 2013; their daughter, Sandra; granddaughter, Brenda Barkow; her parents; three sisters; and four brothers.

The family would like to extend special thanks to Agnesian Healthcare Hospice Hope, Pastors Nate Gauerke and Sarah Timian of Hope Lutheran Church; Dr. Timothy Roberts; and, especially, the staff of Heartland House for their tender and loving care.

To order memorial trees or send flowers to the family in memory of Edna Henne, please visit our flower store.