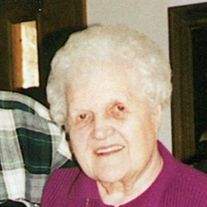 Doris E. Rux, age 90, of Coloma, passed away Sunday evening, April 27, 2014, at Heartland House in Wautoma. She was born July 7, 1923 in Milwaukee, the daughter of Peter and Elizabeth (Scbolsky) Balog. She married Albert "Sam" Schley. He preceded her in death. Later, she married Erwin H. Rux on July 15, 1975. He passed away on December 23, 1982. Doris and her first husband operated Sam & Doris' Bar in Richford for many years. She was a member of Prince of Peace Lutheran in Coloma. She is survived by her daughter-in-law, Judith A. Schley, Wautoma; two stepchildren, Ina Rae (Donald) Janke, Coloma, James Rux, Biloxi, Mississippi; two step grandchildren, Vicki (Mark) Botner, Little Rock, Arkansas, Brian (Tami) Janke, Westfield; great grandchildren, Tyler, Wyatt, Logan, Bryn, and Cayman. She is further survived by other relatives and friends. In addition to her husbands, she was preceded in death by her son, Dennis Schley; and by her parents. Funeral services will be held on Wednesday, April 30, 2014 at 11:00 am at Prince of Peace Lutheran Church in Coloma with Rev. Robert Hanson officiating. Inurnment will be at Richford Cemetery at a later date. Visitation will be held on Wednesday at the Church from 10:00 a.m. until the time of services.


To order memorial trees or send flowers to the family in memory of Doris Rux, please visit our flower store.