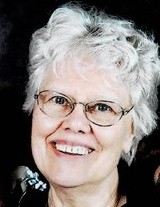 Dora and her husband resided in Cudahy before moving to Wind Lake in 1964. They moved to Wautoma in 1978 and then relocated to Fort Mill, South Carolina. They returned to Wautoma in 2000. Dora will be fondly remembered for her love of family, especially her grandchildren and great grandchildren . She also enjoyed gardening. Dora was a member of Crossroads Family Church where she assisted with the children’s programs.

She is survived by three children, Deborah Moosbrugger, Wautoma, Bennett (Donna) Moosbrugger, Waterford, and Kristina Hutchins, Eau Claire; her grandchildren,  Brandon (Dana) Bradley, Thorp and Hannah (Jon) Patterson, Chippewa Falls; her great grandchildren, Laylla, Brycen, Phelix, Liam, Harvey, Isabella, Knox, Lydia, along with an expected great granddaughter; one brother, Edward Woerner, Cecil. She is further survived by other relatives and dear friends. In addition to her husband, she was preceded in death by her son, Gerald Moosbrugger; her parents; and by her sister-in-law, Carol Woerner.

To order memorial trees or send flowers to the family in memory of Dora Moosbrugger, please visit our flower store.