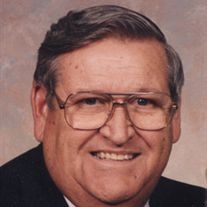 Don was born in Milwaukee, Wisconsin on December 18, 1925, the second son of Herman Charles and Magdelene Annette (Gueguierre) Barkow.

Don married Dorothea B. "Dottie" Ames on May 29, 1948, in Milwaukee. They attended grade school together and graduated from Wauwatosa High School in January, 1944. After serving in the Army Air Forces, Don attended the University of Wisconsin-Milwaukee, and was employed by Milwaukee Gas Light Company (now WE Energies) in 1948 as a serviceman. He became manager of the Northern Division of Wisconsin Gas district operations based in Wisconsin Rapids, Wisconsin, moving there in 1961. He was responsible for bringing natural gas to area industries and later to residential customers. Don was recognized for his thorough record-keeping and cost saving measures to the company.

After passing Silver Lake on frequent trips to Milwaukee to visit family, Don and Dottie were enticed to buy a cottage on the lake in 1963 and spent weekends and summers there until 1974. Retiring in 1985, they wintered in Groveland, Florida and summered in Tomahawk, Wisconsin, until 1991, when they returned to Wautoma, finally staying year round after 2002.

Don was a fair and moral man, faithful and devoted husband, loving and dedicated father, and a generous and loyal friend.

Per the family's desire to honor Don's request, no memorial service will be held.

The family would like to extend sincere thanks to the staff and compassionate CNA's of Heartland House for their patient care of Don during his early months there and especially the tender and respectful consideration for him and the family during the final weeks of his life. Our thanks also go to Agnesian Hospice Hope for the care, comfort and support offered since July 5, 2014.


To order memorial trees or send flowers to the family in memory of Donald Barkow, please visit our flower store.