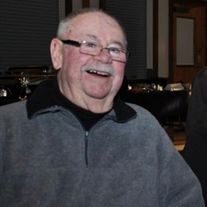 Daniel Edward Burdick Sr., age 75 of rural Wautoma/Neshkoro, died on Saturday, February 1, 2014 at Aurora St. Luke's Hospital, Milwaukee. He was born in Beloit, WI, on April12, 1938 to Daniel C. and Jean (Lord) Burdick. Daniel graduated from Oshkosh High School in 1956 where he also met his future wife Elizabeth Kubasta. Dan and Beth were married on June 14th, 1958. After high school, Dan served 4 years in the U.S. Air Force. He was known as "The best bartender in the Fox Valley". Daniel eventually chased his dream when he built Daniel's Edge O' Town cocktail lounge. Later, he delivered medicine for a local pharmacy and also brought cheer to the recipients. Dan and Beth retired to Waushara County in 2002. Dan then used his story telling skills to read to children at the Wautoma Library, then weekly at Head Start where he became known as Mister Dan. Dan had a wonderful sense of humor and was known for telling funny & outlandish stories. His greatest loves in life were his wife and family. He was happiest with the laughter heard when his family was around him. He was a devout member of St. Peter parish in Oshkosh and then St. Joseph in Wautoma.

Memorial Mass will be held on Saturday, February 8, 2014 at 11AM at St. Joseph Catholic Church, Wautoma. The family will greet relatives and friends at church on Saturday from 9:30AM until the time of Mass at 11AM. Leikness Funeral Home, Wautoma is assisting the family with arrangements. www.wautomafuneral home.com

In lieu of flowers, memorials may be made in Daniel's name to Wautoma Public Library, Wautoma Head Start or St. Joseph Catholic Church.


To order memorial trees or send flowers to the family in memory of Daniel Burdick Sr, please visit our flower store.