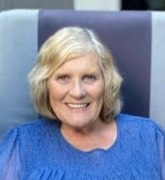 Colleen L. Van Cuick, age 75, of Wautoma, passed away Sunday, November 14, 2021 at her home, with her family by her side and her Maltese companion, Muffin, at her feet.

She was born December 10, 1945 in Radway, Alberta the daughter of Gene and Ruth (Sypes) Garrow. She married Leroy H. Van Cuick on February 14, 1993 in Appleton.

Colleen was preceded in death by her parents; one brother: Rennie  Garrow; one sister, Patricia Ann (Ralph) Schober.

Colleen will be remembered fondly for her deep love and devotion to her husband, Leroy, family, and friends; she will be celebrated for her festive spirit, her wit, and her industrious nature. As a young girl she lived in many places including Canada, Alaska, Kansas City, Iowa, and Chicago before her family settled in East-Central Wisconsin. Colleen participated in drama productions, synchronized swimming, and spent a stint as her school’s mascot. After high school, Colleen went on to raise three beautiful daughters and seven grandchildren. As a mother and grandmother rising through the ranks of the banking world, Colleen exemplified balance and stilled her capacity to love and her hardy work ethic into her children and grandchildren. Colleen was known to excel at anything she put purpose toward. She was keen with numbers and took great pride in her handicrafts. Colleen created beautiful pieces with her impressive skill in sewing, quilting, and knitting. She was known as a gardener, great cook, a designer, a leader, a host, and was quite often the funniest person in the room.

Eventually, she made a home on Lake Poygan with her husband Leroy. It was there that their love grew for each other and lake life; they enjoyed countless adventures in jet skiing, boating, snowmobiling, and fishing. In retirement, they moved to Ole Lake, just east of Hayward, and spent time on the Chippewa Flowage. Here, she continued to pursue her hobbies and found community in her local church. When she wasn’t visiting friends, at bible study, or hosting family, she and Leroy enjoyed traveling the country by RV.

Colleen’s family would like to express their deepest gratitude for the exceptional care and support provided to both Colleen and Leroy by Nicole (Nikki), Michelle, Kristina, Jannis, and Chaplain Karin from ThedaCare at Home. Also, thank you to Team Gleason for providing communication assistive technology, the ALS Association, especially Diane Fergot and David Ferrie.

Private family services will be held at Leikness Funeral Home in Wautoma. If desired, memorials may be given for Amyotrophic Lateral Sclerosis (ALS) research at: www.alsworldwide.org

To order memorial trees or send flowers to the family in memory of Colleen Van Cuick, please visit our flower store.