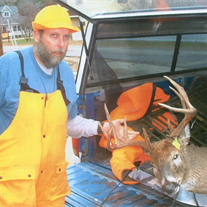 Clifford John Fisch age 56 of Wautoma, WI passed away in his home, surrounded by his family and pets on Sunday, December 13, 2015.
Cliff is survived by a daughter and son in law, Jennifer and Aaron Murphy, Wautoma; two grandsons: Brandon and Kenny Johnson of Berlin; a very special little grandson: Beau Murphy, Wautoma; two special granddaughters-to- be: Samantha Miller and Alex Glonka, Berlin; and a very special buddy: Gerald Butzin, Wautoma.
Cliff was known to his loved ones as "Grandpa Squeaky", a nickname he was given 20 years ago by his oldest grandsons because of the "squeaky" truck he drove when they were little. They would hear him coming a block away and run to meet him at the door.
Cliff enjoyed hunting, fishing, attending auctions, woodworking and knife making. He loved the family pets and had a special bond with his dog Kaycee. He always had Beau's favorite shows ready on TV for him when he came home from school and gave "knuckles' to him every day before he left. Before he passed, he had pre-recorded many of these shows so Beau would have them if he was gone.
Cliff worked 28 years as a bootmaker at Russel Moccasin in Berlin. Anyone who has a pair of his boots will tell you he was an amazing bootmaker! He loved his work family and took great pride in what he did.
Cliff was a private man, and wished for a private family service in the spring which will include the planting of a tree he had chosen. He was dearly loved, and will be greatly missed, but never forgotten.


To order memorial trees or send flowers to the family in memory of Clifford Fisch, please visit our flower store.