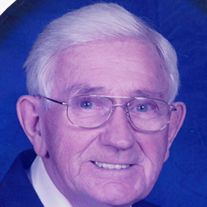 Clarence J. Walslager, age 88, of Wautoma, formerly of Milwaukee, passed away Wednesday, March 25, 2015 at Columbia Health Care Center in Wyocena. He was born Nov. 25, 1926 in Easton, WI, the son of George and Cora (McKinnon) Walslager. He married Marge J. Boehme on July 13, 1946 at St. Michael's Catholic Church in Milwaukee. Clarence was employed at Harley Davidson Corp, Kearney & Trecker and he retired from Evinrude Motors in Milwaukee. Later, he and his wife moved to Wautoma where he worked at the Copps Food Center for 12 years. He enjoyed fishing, wood scrolling and organizing the Sussex Senior Tours for many years. Clarence especially enjoyed spending time with the love of his life, Marge and his entire family. He was a member of St. Joseph Catholic Church in Wautoma. Clarence sang in a barber shop quartet in Menomonee Falls for a number of years. He is survived by his wife of almost 69 years, Marge Walslager, Wautoma; one son, Jim (Diane) Walslager, Ixonia; one daughter, Jacki (Rick) Belanger, Wautoma; eight grandchildren, Jamie Waldo, Angie (Joe) Torres, Michelle Stich, Carrie (Herb) Wilke, Holly (Steve) Yeko Jr., Jimmy Walslager, Sean (Amanda) Williams, Shane Williams; 16 great grandchildren; 11 great-great grandchildren; one sister, Dorothy (Merle) Klug, Milton; a sister-in-law, Vernice Wesley, Friendship. He is further survived by other relatives and dear friends. He was preceded in death by his daughter, Barbara Stich; one grandson, Larry Stich Jr.; one granddaughter, Danielle Belanger; a great grand- daughter, Hope Williams; one brother, Kenneth Walslager; one sister and brother-in-law, Donna and Ted Braun; and by his parents. A Mass of Christian Burial will be held on Wednesday, April 8, 2015 at 11:00 a.m. at St. Joseph Catholic Church in Wautoma with Rev. David Greskowiak officiating. Burial will be at Holy Cross Cemetery in Milwaukee at a later date. Visitation will be held on Wednesday at the Church from 9:30 a.m. until the time of services.


To order memorial trees or send flowers to the family in memory of Clarence Walslager, please visit our flower store.