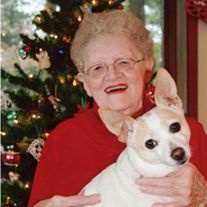 Claire Ann Warren, age 86, of Wautoma, WI passed away peacefully on Friday, April 24, 2015 at Juliette Manor in Berlin, WI with her family by her side. Claire had resided at Juliette Manor since January 2015. Claire was born February 18, 1929 in Neenah, WI the daughter of Andrew and Clara (Wicinski) Geiger. She grew up on the family farm in Neenah where she developed her love for music, animals (especially dogs), nature and baking. Claire played the piano and the accordion. Always gathering the family around for a sing along as she played her favorite songs. She graduated from Neenah High School in 1947. She always loved her high school class reunions and keeping in contact with many high school friends. Claire married Richard Warren on September 10, 1949 in Neenah. He preceded her in death August 11, 1977. Later moving to Berlin to run Steele's Restaurant with her husband. Claire was a wonderful; mother and homemaker. She worked various jobs after her children were grown. She worked at The Berlin Journal, and Kimberly Clark retiring in 1991 and moving to her home on Big Silver Lake in Wautoma. Claire loved baking, gardening and quilting always sharing her goodies with family and friends. There was not a time in her life that she did not have the constant companionship of her dogs. Her love for her four legged friends was always apparent. Never missing a day of walking them around the lake. She was a member of St. Joseph Catholic Church in Wautoma. Claire is survived by three of her children, son John of Berlin; daughters, Carol (Robert) Nickolai of Neshkoro, and Mary (Donald) Drover, of Berlin; seven grandchildren, Christopher (Satomi) Warren, David (Natay) Warren, Erin (Tom) Steinberg, Jessica Sedarski (Steve), Nicholas Drover, Alex Drover, and Patrick Drover; four great grandchildren, Hunter, Justin, Brooke, and Jenna. In addition to her husband, she was preceded in death by her parents; one son, Mark Warren; and by one brother, Richard Geiger. Memorial services will be held at 2:30 p.m. Saturday, May 9, 2015 at Leikness Funeral Home in Wautoma with Deacon Jim Trzinski officiating. Inurnment will be at St. Margaret Mary's Catholic Cemetery, Neenah at a later date. Visitation will be held on Saturday from 1:30 p.m. until the time of services at the funeral home.

To order memorial trees or send flowers to the family in memory of Claire Warren, please visit our flower store.