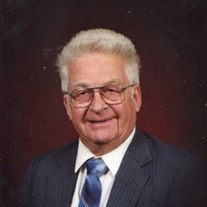 He was born Nov. 15, 1932 on the family farm in the Town of Wautoma, the son of Arthur and Lena (Kromrie) Wedell. He married LaVila Fietz on Nov. 27, 1955 at Zion Lutheran Church in Neshkoro.

Chester attended the former Tamarack School and assisted in farming the family homestead in the Town of Wautoma and also helped many area farmers. He served in the National Guard for several years. Chet worked for Speed Queen Corp. from 1955 until his retirement in 1995. He drove the Speed Queen employee bus from Wautoma to Ripon for several years. Chester also worked at the former Dilt's Hardware of Wautoma delivering bottled gas to customers. He and his family did yardwork for many local residents in the area. Chester enjoyed deer hunting, fishing, bowling, and playing cards with friends. He was a member of Trinity Lutheran Church in Wautoma where he sang in the choir and served on the Board of Elders.

Funeral services will be held on Thursday, May 21, 2015 at 12 noon at Trinity Lutheran Church in Wautoma with Rev. Brian D. Rohde officiating. Burial will be in Wautoma Union Cemetery.

Visitation will be held at the Church on Thursday from 10:30 a.m. until the time of services.


To order memorial trees or send flowers to the family in memory of Chester Wedell, please visit our flower store.