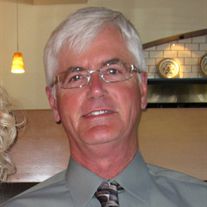 Charles H. "Chuck" Thrasher, age 69, beloved husband, father, grandfather, devoted friend, and community servant, died unexpectedly at his home on June 10, 2014. His absence will be felt by many.

Chuck was born February 28, 1945, in Berlin, WI, as the son of Joseph A. and Ruth E. (Janes) Thrasher. He grew up on his family's farm with his 4 siblings and attended Green Lake High School where he met his wife, Janice K. Rohde. They graduated high school in 1963 and were married on February 8, 1964 in Green Lake, WI.

Chuck attended the American Floral Arts School in Chicago, IL where he received his professional training to become a floral designer and business owner. In 1969, he and his wife moved to Wautoma and opened Thrasher's Floral where they ran a successful and respected business for 40 years. Following retirement, he worked as the buildings and grounds supervisor at Hope Lutheran Church in Wautoma. He enjoyed his work but he especially enjoyed the people.

Chuck happily contributed to his community. At Hope Lutheran Church, he was a faithful, active member, served as church council president, and often participated in other activities such as "shanty town", a program designed to increase teens' awareness of the homeless. Chuck was a member and past president of the former Wautoma Jaycees. During his time with the Wautoma Rotary, he served as president, was a member of the Rotary Scholarship Committee, and, along with his wife, hosted a Rotary Foreign Exchange Student from Sweden. Chuck served for 20 years as a concerned member and officer of the Wautoma School Board. As a member and secretary of the Richford Game Club, he supported his love of hunting. Chuck made time for other events, as well. He walked a marathon for the Relay of Life and assisted young hunters in the Youth Pheasant Hunt.

For relaxation, Chuck loved spending time outdoors. Pheasant hunting with his dog, Yancy, and later, Deuce, was one of his most enjoyed activities. A pheasant hunt to North Dakota with his brother was a yearly highlight. Chuck also enjoyed deer hunting, playing softball, and golfing.

Whether Chuck was at work, with a friend, or assisting the community in some way, he always approached life with enthusiasm, humor, and an attitude that every problem could be solved; he just had to figure it out.

Funeral services will be held on Tuesday, June 17, 2014 at 10:00 a.m. at Hope Lutheran Church, 301 E. Mount Morris Ave., Wautoma with Rev. Nathan A. Gauerke officiating. Burial will be in Hope Lutheran Cemetery.

Visitation will be held on Monday at Hope Lutheran Church from 4:00 until 7:00 p.m. and on Tuesday from 9:00 a.m. until the time of services.


To order memorial trees or send flowers to the family in memory of Charles Thrasher, please visit our flower store.