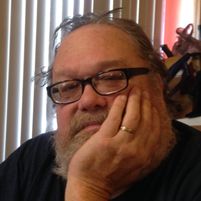 Chuck was born Oct. 19, 1958 in Portland, Maine, the son of Richard and Janet (Bradeen) Pallister. He and his family lived in many different states as his father was stationed in the United States Navy. His father retired from the Navy and the family moved to Sturgeon Bay, WI, where he attended grade school and graduated from Sturgeon Bay High School in 1976. He attended UW-Madison and UW-Green Bay where he received his Bachelor’s degree in Marketing. He then attended UW-Oshkosh where he received his Masters Degree in Marketing. He presently was working on his Masters in Pastoral Counseling through Liberty University, and had two semesters to go to finish this Masters program. He had various careers during his life. At his last job, he was a proud and caring Customer Service Agent for Amazon until his medical condition caused him to take a leave of absence a few weeks ago.

Chuck was a loving and dedicated husband, stepfather, step-grandfather and a great friend to many. He was married to LuAnn (Salberg-Anderson) Pallister. He had a huge capacity to love without judgement. He was a kind, gentle, caring man who absolutely LOVED baseball (Milwaukee Brewers of course) and football (Green Bay Packers). He and his wife started and built a food pantry in 2013 as part of Waushara Community Church’s outreach programs and as of August 2019, the pantry had celebrated its sixth year of running and helping many wonderful people!

He had the gift of listening quietly without judgement and was able to support many in their walk with the Lord through his strong faith in the Lord. He gave his heart to the Lord in the summer of 2010 and was baptized in his wheelchair as a profession of his faith that year as well. He was what his wife called her “gentle giant” because he was a large 6’3” man and loved her so deeply, that many saw this love displayed wherever they went.

He is preceded in death by his father, Richard Pallister. He is survived by his wife, LuAnn; stepdaughter, Amber Anderson (Pat); special granddaughter, Riley Jade Anderson (who he called his best birthday gift and his little sweetie; his stepson, Jason Anderson (Haley) and his special grandson, Graham Pollen Anderson. He is further survived by his mother, Janet (Bradeen) Pallister, DePere; sister, Beth Moeller (Bob) and their children, Jeremy Moeller (Ann) Green Bay, Angie Moeller, DePere and Chad Moeller (Vanessa) of Peoria, Arizona; his brother, Rick Pallister (Heather) and their children, Hannah and Jacob of West Des Moines, Iowa. His also survived by great nieces and nephews whom he adored.

One of the last wishes that he expressed, was that his wife LuAnn, who has short-term memory loss, was taken care of and would like for all who feel led to, let their financial donations to be given to help her get through this time of loss and grief without financial worry. With his huge sense of humor, his favorite phrase this was from Mator (The cartoon pick-up truck) saying “Git-R-Done!” He thanks everyone for their prayers and support while he was ill and truly loved all who joined in.

To order memorial trees or send flowers to the family in memory of Charles Pallister, please visit our flower store.