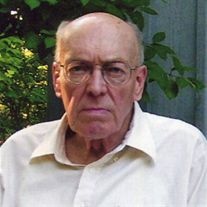 Charles was a graduate of Neshkoro High School and attended Ripon College. He served in the Medical Corps of the United States Army during World War II and saw combat action during the Battle of the Bulge. Later, he was a graduate of Illinois College of Optometry in Chicago, IL.

Doc was a lifelong resident of Neshkoro, where he practiced optometry for many years until his retirement. He enjoyed spending time with his family and friends, especially his wife Darleen, hunting, fishing, Tuttle Lake, and walking with his dogs on the farm. As an Optometrist, he took great pride in serving his many patients over the years.

Charles was a member of St. John's Lutheran Church, Princeton. He was a longtime director of Farmers Exchange Bank in Neshkoro and served on the Neshkoro Village Board.

In addition to his wife, he was preceded in death by his parents, and by his sister, Mary Roberts.

A Memorial Service will be held at a later date.

To order memorial trees or send flowers to the family in memory of Charles Johnson, please visit our flower store.