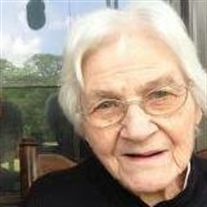 Cecelia Mae Madson, age 94, of Coloma, died peacefully at home on Thursday, July 30, 2015 in the presence of her daughter and granddaughter.

Cel loved sewing, cooking, eating, gardening and animals, especially her cats. She was a faithful member of Prince of Peace Lutheran Church in Coloma and participated in Adult Bible Study. Cel will be lovingly remembered and deeply missed by her children and grandchildren. Everyone loved her sense of humor, laughs, and giggles.

In addition to her husband, she was preceded in death by her parents and by numerous brothers and sisters.

Funeral services will be held at 12 noon on Wednesday, August 5, 2015 at Prince of Peace Lutheran Church in Coloma with Rev. Jacob M. Gawlik officiating. Burial will be in the parish cemetery.

Visitation will be held on Wednesday at the Church from 10:00 a.m. until the time of services.

To order memorial trees or send flowers to the family in memory of Cecelia Madson, please visit our flower store.