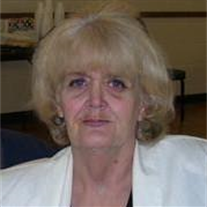 Cecelia (Cele) J. Bruce, age 71, of Wautoma, died peacefully Wednesday, May 18, 2016 at her home in Wautoma, WI. She was born May 10, 1945 in Philadelphia,MS, the daughter of Roy and Otazell (Peebles) Adams. She married Thomas Wayne Bruce on June 5, 1965. He preceded her in death in July of 1996. She graduated from McCarther High School in Hollywood, FL, and soon after moved to Chicago, IL where she met her late husband. She spent most of her years as a housewife and toting her boys to many practices and sporting events. She enjoyed watching her sons participate in their sporting activities. In her later years she enjoyed watching reruns of NCIS and Matlock, and loved spending time with her grandchildren watching Disney movies or playing video games with them.

A memorial gathering will take place on June 4th, 2016, in Wautoma, WI. Place and time still to be determined. A memorial fund has been established to help with costs of cremation and the memorial itself. To donate please visit: gofundme.com/celebruce.


To order memorial trees or send flowers to the family in memory of Cecelia Bruce, please visit our flower store.