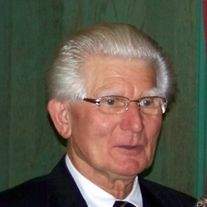 Carl Herman Roeske was called home on February 28th 2015 at the age of 84. He was born on June 21st, 1930 in Wautoma to Oscar and Violet (Bruch) Roeske. He originally attended Spees Corners Country School. Later he graduated from Wautoma High School in 1949. Carl served his country in the Army during the Korean war in Ulm, Germany with the Field Artillery as a field wireman in the communications section from July 1953 to May 1955. He met the love of his life Lucille Schwanke, and married August 27th 1960. Carl helped work the family farm and was an employee of Speed Queen for 42 years until his retirement. He also was a member of the United Steelworkers Local 6625 where he had served as vice president and president of the group. Carl was a faithful member of Grace Lutheran Church in Deerfield, serving in a variety of roles including Sunday School Teacher, Elder, and Head Usher. Throughout his life, Carl was an avid hunter and fisherman as well as a gifted gardener.

Funeral services will be held at 11AM on Thursday, March 5, 2015 at Grace Lutheran Church, Hancock with military honors and burial in the Church Cemetery. The family will greet relatives and friends from 4-7PM on Wednesday at Leikness Funeral Home, Wautoma and again on Thursday at church from 10AM until the time of service at 11AM.

The family would like to thank Berlin Hospital and Wild Rose manor for their care.

To order memorial trees or send flowers to the family in memory of Carl Roeske, please visit our flower store.