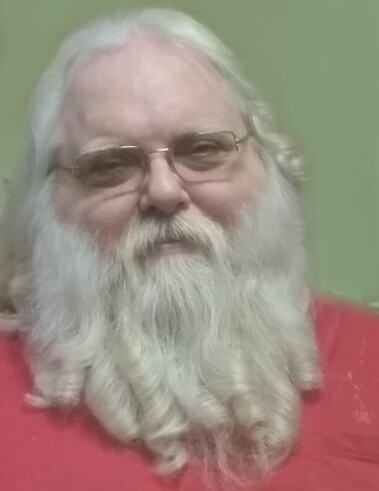 Brian Keith Busby, 51, of Omro, WI, passed away peacefully at home surrounded by his family, on June 29, 2021, after a lifelong struggle with his health. Brian was born in Chicago, IL, to Ray and Grace (Jozwik) Busby on February 15, 1970. He graduated from Niles West High School and went on to become his mother’s caregiver. In 2000, he met his “bun bun”, Brenda Klemm, and they married in Manawa, WI, on November 3, 2000. Brian was a true renaissance man. The career path that he was most proud of was his work as “The Real Santa Clause,” where he brought joy (and received just as much in turn) to children, pets, parents, and special needs people from all walks of life. He was most happy working on the North Pole sets and made many friends throughout his time there. Brian also enjoyed his “beau-some-ful”, Josephine, that he spent his days with for the past three years. He enjoyed fishing with his grandsons, cooking for his family, spending time with his pet birds: Jayden and Pearl, gardening, selling popcorn, and making new friends wherever he went.

Brian’s family wants to send our sincere thanks to ThedaCare Hospice, including his brother-in-law, Kelly Klemm, who stepped out of his nursing role to watch over him as a brother during his last days, the doctors and nurses with Ascension Medical Group, and the emergency personnel who all helped us care for Brian in his last days.

Services for Brian will be held privately. A Celebration of Life will happen later in the summer for anyone who wishes to attend.

To order memorial trees or send flowers to the family in memory of Brian Busby, please visit our flower store.