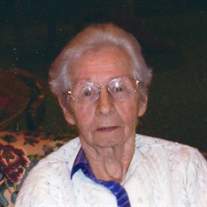 Bonnie spent her early years working on the family farm in Etowah, Arkansas as a sharecropper's daughter. In the early 1950's, she moved north with her sister Dot and settled in Antioch, Il. where she met her future husband. Bonnie and Larry resided in Bristol, WI during that time she was employed as a machine operator with Goodyear Tire Co. for 20 years. In 1980, they retired to Wautoma. Bonnie enjoyed gardening and canning and always looked forward to her fishing trips in Canada. She belonged to the Wautoma Homemakers.

In addition to her husband, she was preceded in death by one son, Michael Carpenter in 1986; her parents; three sisters, Johnnie Pearl, Mary Jane and Mavis; and by three brothers, Donald, Doyle and Terry.

Memorial services will be held on Saturday, August 13, 2016 at 11:00 a.m. at Leikness Funeral Home in Wautoma with Rev. Robert Weiss. Inurnment will be at Marion Cemetery, Township of Marion.

Visitation will be held on Saturday from 10:00 a.m. until the time of services at the funeral home. In lieu of flowers, a memorial is being established in her memory.

The family wishes to express heartfelt appreciation to the staff of Silver Lake Manor, especially Carol, Laverne and Deb for the compassionate care they gave Bonnie.

To order memorial trees or send flowers to the family in memory of Bonnie Carpenter, please visit our flower store.