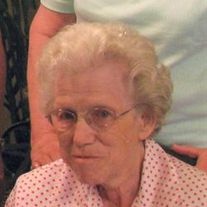 Betty L. Cummings, age 91, of rural Bancroft, passed away Tuesday afternoon, April 8, 2014 at her home with her family at her side.
She was born May 30, 1922, in Polk County, Iowa, the daughter of Fred and Flossie (Warren) Rodgers. She married Lawrence Cummings on June 12, 1940. They later divorced.
Mrs. Cummings was a lifelong resident of the Bancroft area. She enjoyed spending time watching and feeding birds. She was an avid crocheter until her eye sight began to fail. She was very proud to be an active part of the five generations (3 of them) in her family. She so greatly adored the grandchildren, great grandchildren and great-great grandchildren.
She is survived by her children; Barbara (John) Roesener, Plainfield, LaVerne (Mary) Cummings, Cave Creek, AZ, Wayne (Jennifer) Cummings, Plainfield, Herbert (Paula) Cummings, Bancroft; 11 grandchildren, 10 great grandchildren and five great-great grandchildren; her sister, Audrey Butts, Plainfield and her brother, Harold Rodgers, Omaha, NE; further survived by nieces, nephews, other relatives and special friends.
In addition to her parents, she was preceded in death by her son, Rodger Cummings; 2 grandsons and 2 great grandsons; one brother and one stepbrother.
Memorial Services will be held on Saturday, April 12, 2014 at 11:00 a.m. in the Leikness & Stahl Funeral Home, Plainfield. Visitation will be held from 9:30 a.m. Saturday until the time of services at the funeral home. The Leikness & Stahl Funeral Home is assisting the family with arrangements, www.plainfieldfuneralhome.com


To order memorial trees or send flowers to the family in memory of Betty Cummings, please visit our flower store.