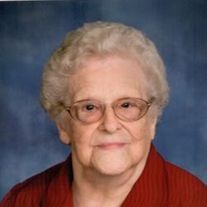 Arnola G. Williams, age 91, of Plainfield passed away peacefully Wednesday, March 12, 2014 with family at her bedside at Saint Joseph's Hospital, Marshfield.
She was born to Guy and Thelma (Bowman) Brindle on July 26, 1922 in Roanoke, IN. She married Kenneth D. Williams on May 4, 1941 in Roanoke, IN. He preceded her in death on August 28, 1986.
Mrs. Williams was a Meal Site Manager in Plainfield for many years and she also farmed with her husband in the Plainfield area.
Arnola is survived by her children, Dalene (Phillip) Rendall of Almond, Wendell (Patricia Detlor ) Williams of Oshkosh and Apache Junction, AZ, Patricia (John) Nick of Fort Collins, CO, Judy Ott of Bradenton, FL, Cheryl (Andrew) Trzebiatowski of Galloway, WI, Rita Atkinson of Lake Mills, WI; 13 grandchildren, 7 great grandchildren and 4 step great grandchildren; two sisters, Lenore (the late, Dale) Lahr, Roanoke, IN and Mary (Paul) Young, Ossian, IN; further survived by nieces, nephews , other relatives and special friends.
In addition to her husband, she was preceded in death by her parents; a daughter at birth, Marilyn Joy; and a great grandson, Evan D. Williams.
Funeral Services will be held on Monday, March 17, 2014 at 12:00 noon in the United Methodist Church, Plainfield with the Rev. David Leistra officiating. Visitation will held from 10:00 a.m. Monday until the time of services at the church. Burial will be in the Plainfield Cemetery. In lieu of flowers, please consider memorials to Plainfield United Methodist Church or a charity of your choice in Arnola's memory. The Leikness & Stahl Funeral Home is assisting the family with arrangements, www.plainfieldfuneralhome.com.


To order memorial trees or send flowers to the family in memory of Arnola Williams, please visit our flower store.