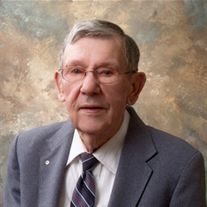 Arden was employed by Speed Queen Corp. for 43 years until his retirement. He served several terms on the Wautoma City Council where he was chairman of the Public Works Committee. Arden was a member of Wautoma Fire Department for many years. He was a longtime active faithful member of Peace Lutheran Church in Wautoma. Arden enjoyed participating in Thrivent Lutheran Brotherhood events with his late wife.

In addition to his wife, he was preceded in death by his parents; son-in-law, John Wandrey; one sister, Florence Groskreutz; one brother, Robert Fenner.

Funeral services will be held on Tuesday, June 16, 2015 at 10:00 a.m. at Leikness Funeral Home in Wautoma with Rev. Ben Sheets of Good Shepherd Lutheran Church in Plover, WI officiating. Burial will be in Wautoma Union Cemetery.

Visitation will be held on Tuesday from 9:00 a.m. until the time of services. A Memorial has been established for Peace Lutheran Church, Wautoma.

To order memorial trees or send flowers to the family in memory of Arden Fenner, please visit our flower store.