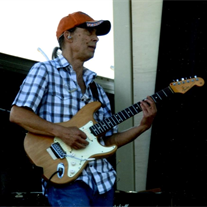 Anthony "Tony" C. Graham, age 59 of Neshkoro, a cancer survivor of 6 years, died unexpectedly on May 9, 2016 at Theda Care Regional Medical Center, Appleton from a heart attack. He was born in Azusa, CA to James and Barbara (Marton) Graham. After high school, Tony went to Berklee College of Music in Boston, MA and earned a degree in music. He was very involved in music while living in Texas, New Mexico and California. Tony was a very well-known musician and assisted Metallica on one of their albums. On May 21, 2005 he married Evangelina Solis in Wichita Falls, TX. In 2009 the couple moved to Wisconsin. Tony was an original member of the band, The Bourbon Cowboys and played Lead Guitar. When he wasn't involved in music, Tony loved to cook and his cooking skills were appreciated by his family and friends. Tony every night would sit with Kashmir, his dog, and tell stories and fairy tales, he loved his dog. He will be sadly missed by his fans, friends and family.

Tony is survived by his wife: Evangelina "Vangie" Graham; children: Nikki (Jake) Patton, Kyle Graham and his wife, Kelly Mathews, Vanessa Ziva (Stephen) Gunther; step mother: Betty Graham; his dog: Kashmir; brother: James Graham; other relatives and many fans and friends. He was preceded in death by his parents.

A memorial gathering will be held at a later date.


To order memorial trees or send flowers to the family in memory of Anthony Graham, please visit our flower store.